UK percussionist Joëlle Barker is known for her sensitivity and dynamism. She prides herself on her adaptability, versatility and endurance as a female session drummer.

Since graduating from SOAS University of London, Joëlle has worked with numerous acts worldwide, including artists such as Yasmin Levy, Above and beyond, Celloman and Ruby Turner.  Theatre and dance credits include The Royal Shakespeare Company, Birmingham Royal Ballet,  Sonia Sabri Dance co, Kilndle Theatre (Kiln), and Now and Then Productions. 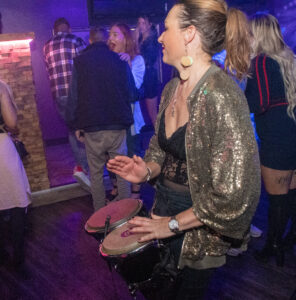 Joëlle is now performing and recording with The Edwin Starr Band and also her own company JoelleBees Percussion and Sax DJ act performing solo and duos for weddings and events in and out of the UK.  Alongside ample session work and education – she is engaged in recording projects of her own, such as her co work with Barker & Moon and Audiobee.